Buy .500 S&W Ammo Online
.500 S&W Ammo For Sale is the most powerful production handgun cartridge on the planet, also known as the Smith & Wesson Magnum. These bullets, affectionately known as the “half-incher,” can easily take down big game that weighs 1,000 pounds or more and is at the top of the big-bore spectrum.

With its large bullet and hefty case, the .500 Magnum rounds are no compromises. Each bullet has a diameter of .500 inches and sits in a semi-rimmed case that is 1.625 inches long. Together, they reach a total length of 2.3 inches, which is huge for a handgun round.

As of today, .500 S&W ammo has the highest muzzle energy of any handgun ammunition, which ranges between 15 and 40 percent more foot pound-force than the .460 S&W cartridge. It is possible to achieve a velocity of 941 feet per second (ft*lb) with a lightweight, 350-grain full metal jacket rounds, while Double Tap’s specialty ballistic rounds can reach 3,032 feet per second (ft*lb).

Types Of .500 S&W Ammunition:
A number of bullet options are offered by manufacturers of the .500 S&W Magnum cartridge, ranging from standard soft points to Hornady’s LEVERevolution bullet.

The following are some of the most common variations that shooters encounter:

Full Metal Jacket (FMJ):
Many people think of FMJ ammunition as the standard of ammunition. In FMJ ammunition, lead is jacketed with copper or another hard metal. The projectiles penetrate deep and do not expand as much as soft point or JHP ammo. FMJ ammunition is usually the cheapest .500 S&W ammunition available.

Soft Point Ammo:
The majority of soft point ammo is comprised of a lead bullet covered with a harder metal, commonly copper. Instead of being entirely coated in copper, the round’s nose is left open for expansion upon impact.

Jacketed Hollow Point (JHP):
Its lead projectile is jacketed in hard metal, but it has a hollow point instead of a solid bullet. Hollow points allow the projectile to expand on impact and are often used for hunting and self-defense.

Lead Flat Nose (LFN):
This cartridge has a flattened lead bullet on its exposed end, which allows more expansion than round-tipped bullets. As a result, it is easier to score targets, since the flat nose cuts paper smoother. Some shooting ranges and national hunting areas may prohibit these bullets because of their exposed lead.

Flex Tip Technology (FTX):
It is Hornady’s equivalent to specialized JHP ammunition, a jacketed hollow point round with a ballistic tip. When fired, the bullets explode into petals and are consistent and effective. Due to its exceptional stopping power, the FTX line penetrates thick hide and skin, making it easier to hunt faster and more effectively.

Hard Cast Ammo:
In hard cast ammunition, bullets are made from alloys that are extremely hard and strong. This causes the projectile to be heavier and more accurate.

It has extremely high recoil energy, as well as a high velocity. The muzzle energy of the .500 Mag is over 3,000-foot-pounds, which is twice the energy of the venerable .44 Magnum. In order to reduce recoil and energy, revolvers containing this big-bore cartridge often have compensators installed so that they are easier to handle.

It is not recommended for novices or new handgun hunters to use this big-bore round due to its weight and massive ballistic force. Despite killing grizzlies and polar bears with .500 S&W Magnum handguns, they aren’t suitable for concealed carry and self-defense. 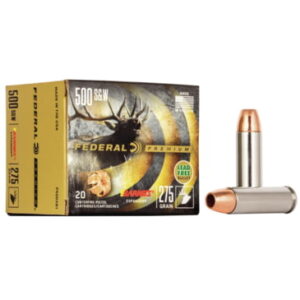 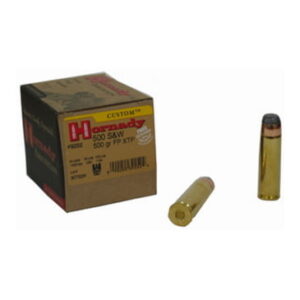 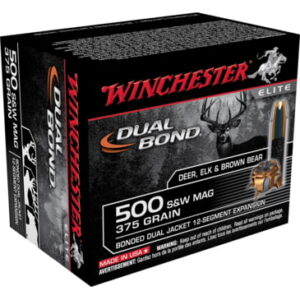